Brookfield, Ill. – The Chicago Zoological Society, which manages Brookfield Zoo, is happy to announce the hatching of a short-beaked echidna (pronounced ih · KID · nuh). The hatching of this baby echidna, which is called a puggle, is a first in the zoo’s history. Echidnas is very unique. They are one of only two mammal species (the duck-billed platypus is the other) that are in the order Monotremata, or mammals that lay eggs. 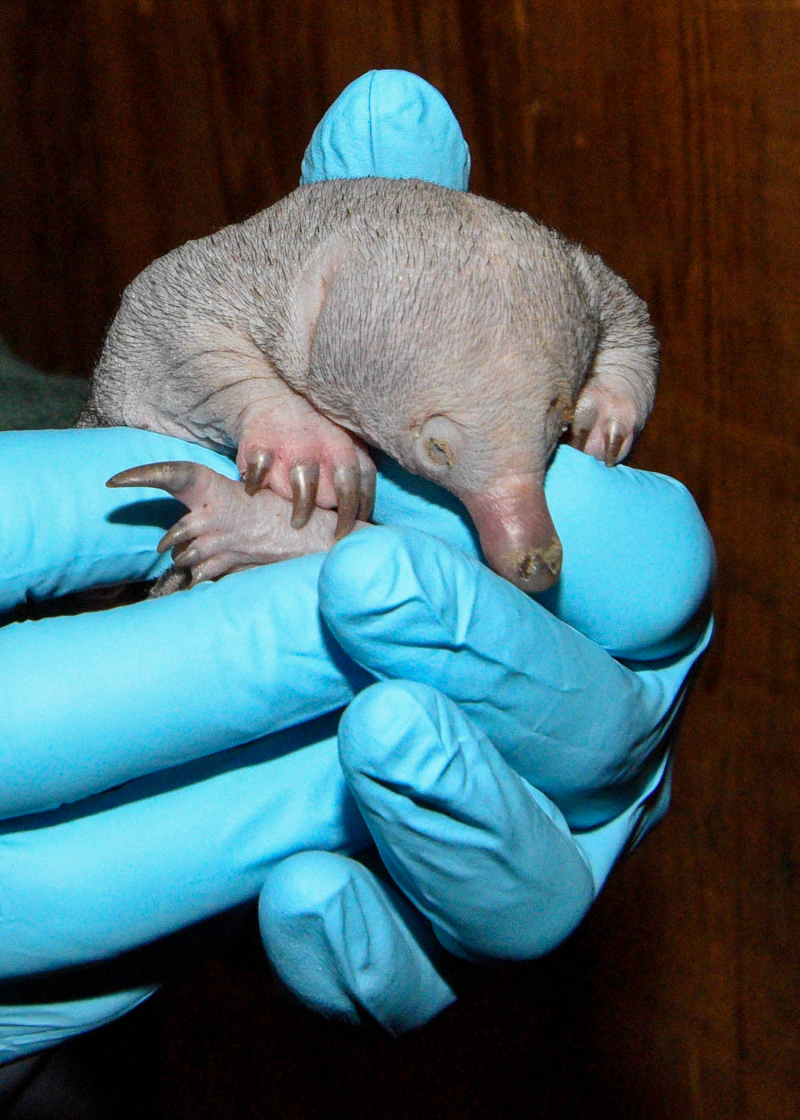 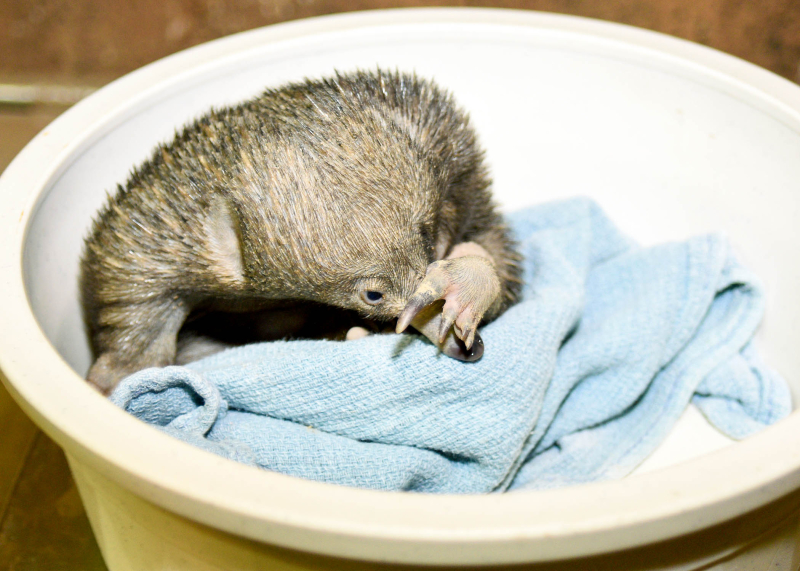 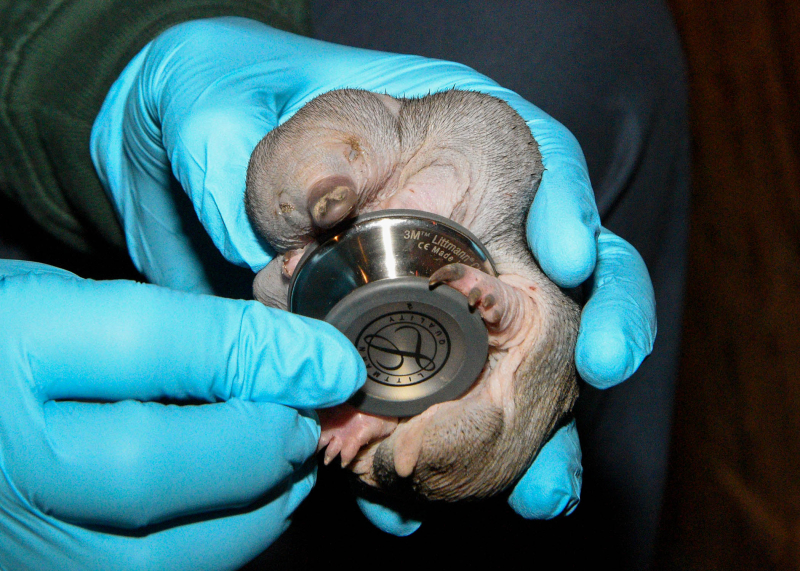 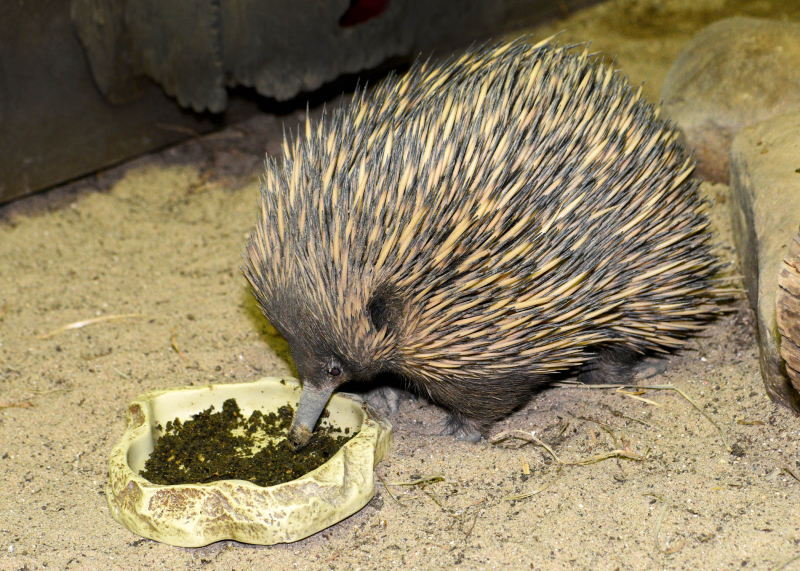 The unnamed and unsexed puggle hatched sometime between March 2 and 5, 2022, and will remain in a nestbox for a few more months receiving nourishment from Waddles, its 47-year-old mother. Waddles, like all echidna mothers, leaves her puggle in the nestbox, which simulates a burrow, and only returns to nurse it every few days. She then uses the substrate provided to her in the nestbox to secure the puggle until she returns to nurse it. Since its hatching, the animal care staff has been closely monitoring the puggle to ensure it is developing normally and weighing it frequently to make certain it is nursing from its mother.

Once the puggle ventures out of the nestbox, which is anticipated to be sometime in August, guests will be able to see it in the zoo’s Australia House. In the meantime, the zoo’s other echidnas, including Waddles; the puggle’s sire, 48-year-old Pokey; 14-year-old Kapi; 31-year-old Rex; and the oldest animal at Brookfield Zoo, 53-year-old Adelaide, can be seen in their habitats.

A female echidna incubates a single soft leathery egg in her pouch for a short period of about 10 days. The young blind and hairless puggle, which measures about the size of a jelly bean at hatch, clings to hairs inside her mother’s pouch for a few months. Once its spines begin to harden at about 8 weeks old, the mother will remove her offspring from the pouch and build a burrow for it to continue to develop. It will continue to nurse from mom until it is about 7 months old.

Currently, there are only 29 short-beaked echidnas in 10 accredited North American zoos, including Brookfield Zoo. They are native to Australia and central and southern New Guinea. According to the International Union for Conservation of Nature and Natural Resources (IUCN), there are no major threats to the short-beaked echidna in the wild, although it is threatened by overhunting for food in parts of New Guinea.

The species has a distinctive long, tubular snout. It does not have teeth, but rather a 6-inch-long sticky tongue to gather food, which includes ants, termites, and insect larvae. There are two sets of hardened, keratinous spines — one set on the roof of the mouth and one at the base of the tongue — for grinding insect exoskeletons into a paste. Their back is covered with stout 2-inch-long spines, which are actually tough, hollow hair follicles, among a fur coat of varying color from light brown to black. The underbelly lacks spines, but is covered with fur and thick bristles. Their feet have five flat claws that are adapted for digging. As adults, echidnas measure between 12 to 21 inches long and weigh between 10 to 13 pounds depending on the sex.

Those interested in helping care for the short-beaked echidnas at Brookfield Zoo can contribute to the Animal Adoption program. For $ 35, a recipient receives the Basic Package, which includes a 5-inch x 7-inch color photograph of an echidna, a personalized certificate of adoption, an echidna fact sheet, an Animal Adoption program decal, and an invitation to the exclusive 2022 Animal Adoption summer event. To purchase, visit www.CZS.org/AnimalAdoption.

We use cookies on our website to give you the most relevant experience by remembering your preferences and repeat visits. By clicking “Accept All”, you consent to the use of ALL the cookies. However, you may visit "Cookie Settings" to provide a controlled consent.
Cookie SettingsAccept All
Manage consent

This website uses cookies to improve your experience while you navigate through the website. Out of these, the cookies that are categorized as necessary are stored on your browser as they are essential for the working of basic functionalities of the website. We also use third-party cookies that help us analyze and understand how you use this website. These cookies will be stored in your browser only with your consent. You also have the option to opt-out of these cookies. But opting out of some of these cookies may affect your browsing experience.
Necessary Always Enabled
Necessary cookies are absolutely essential for the website to function properly. These cookies ensure basic functionalities and security features of the website, anonymously.
Functional
Functional cookies help to perform certain functionalities like sharing the content of the website on social media platforms, collect feedbacks, and other third-party features.
Performance
Performance cookies are used to understand and analyze the key performance indexes of the website which helps in delivering a better user experience for the visitors.
Analytics
Analytical cookies are used to understand how visitors interact with the website. These cookies help provide information on metrics the number of visitors, bounce rate, traffic source, etc.
Advertisement
Advertisement cookies are used to provide visitors with relevant ads and marketing campaigns. These cookies track visitors across websites and collect information to provide customized ads.
Others
Other uncategorized cookies are those that are being analyzed and have not been classified into a category as yet.
SAVE & ACCEPT